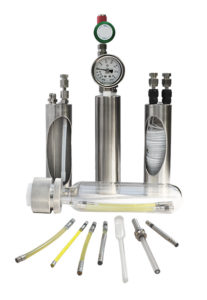 The purpose of a gas standard is to establish accurate reference points for the verification of an analysis.

These problems are solved by using permeation tubes in lieu of gas cylinders. 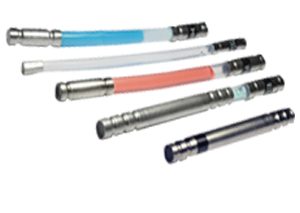 Disposable Permeation tubes are tubular devices about the size of a pencil with liquid component compound sealed inside. The component compound slowly permeates through the tubing wall creating a very small flow of component vapor. Disposable tubes have a finite operating life and are discarded at the end of that life. They are primarily used to make lower and medium concentration mixtures. 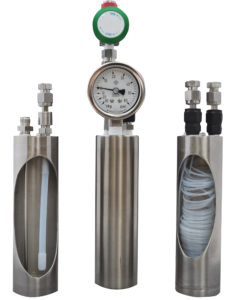 Refillable Permeation tubes generally offer a broader range of concentration than disposable tubes. They are often recommended for long-term service and for applications requiring a broad range of calibration points.

Refillable tubes are used for higher concentration mixtures. They are also used for high pressure gas components (CH4, C2H4, O2, H2, etc.) where the gas must be frequently replenished. KIN-TEK offers factory refill and recertification services; however, some tubes may be refilled by the customer (with appropriate safety measures in place).